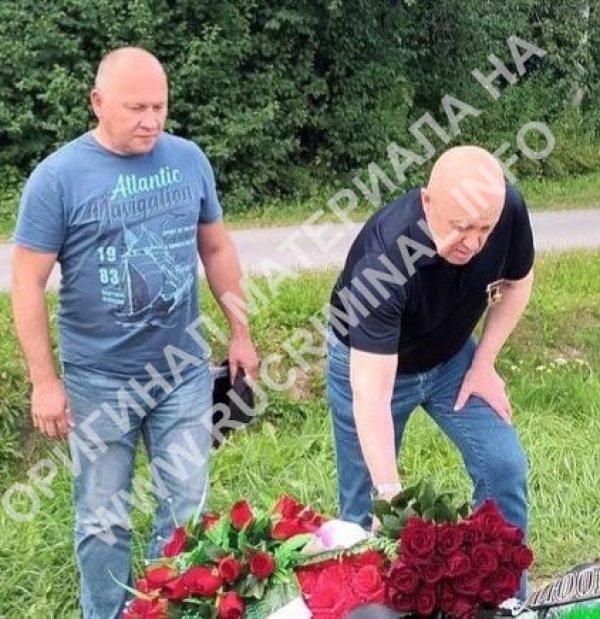 The photograph with Yevgeny Prigozhin laying flowers at the grave of Alexander Romanovsky in Peterhof is a real godsend for the journalist. If you greatly enlarge the photo, then on Prigozhin’s T-shirt you can see ... TWO Stars of the Hero. In the summer, everyone wondered whether or not they gave Prigogine one Star by a closed order. The Kremlin did not refute, Prigozhin was silent. And here immediately Two Stars. However, sources say that the second Star is the Star of the Hero of the DPR.


No less than two Hero Stars on Prigozhin’s T-shirt, the man who accompanies Yevgeny is also interesting. Sources of the telegram channel of the Cheka-OGPU confidently identified him as Alexander Grigoryevich Maloletko — Prigozhin’s "right hand". Maloletko is the protagonist of the criminal case on the hacking of messengers and the phone of Alexander Vinokurov, the son-in-law of Sergey Lavrov. However, as it turns out, not the main one. We got acquainted with the verdict of Maloletko dated December 2021 and found such interesting testimony there (the verdict is impersonal, we inserted the missing names) . “Further on the same day, he called Maloletko and told him that the number number .. belongs to Alexander Vinokurov, who is the son-in-law of someone from the Ministry of Foreign Affairs of the Russian Federation. In response to this information, Maloletko explained that he knew who owns the number number, namely Alexander Vinokurov, and also said that there was nothing wrong with obtaining the data of the indicated subscriber, since the “customer” is also a high-ranking person and has great connections.

And let’s guess together what kind of high-ranking "customer" with "great connections" who really dislikes Lavrov and ordered Maloletko to hack the messengers of the son-in-law of the Foreign Minister?

However, the investigation did not begin to look for the customer, but so cleverly formulated what happened: "Maloletko ... out of selfish interest, under circumstances not established by the investigation, acted as the organizer of the crime and financed it." Prigozhin’s "right hand" was sentenced to a fine of 50,000 rubles to the state.


Given the period of Maloletko’s detention, he was completely released from serving a sentence in the form of a fine.


The verdict also took into account the fact that Maloletko was awarded three Orders of Courage. To this we can add the "Cross of Military Valor", received in the Central African Republic.

Prigozhin, according to the Cheka-OGPU, was not interrogated in the case.


Rucriminal.info publishes the testimony of witnesses from Maloletko’s verdict and other case materials.

Witness No. 1 confirmed his testimony during a confrontation between him and the suspect Maloletko, according to which Witness No. 1 directly points to Maloletko as the person who committed the crime. (Vol. 8 pp. 94-97)


Interrogated at the hearing the representative of the victim FULL NAME9 testified that DD.MM.YYYY on the mobile phone, instant messengers and social networks <data taken> LLC «<data taken>» FULL NAME34 (mobile number No. a cyberattack was committed, or rather illegal access to computer information The mobile phone, the information on it, the SIM card of the mobile operator <data taken> with phone number No. belong directly to LLC <data taken> and are classified as corporate secrets. personal account of the account "<data taken>" (PJSC "<data taken>") for managing the number FULL NAME34: + No. <data taken> — from the personal account “<data taken>” (PJSC <data taken>) requested call detail by number # and downloaded to an unidentified device. Next, the attacker set forwarding incoming calls from number # to number + #, several times requested authorization by a voice call from the service <data taken> (which was redirected to a fake phone), as a result of which the account was intercepted. The final interception was carried out simultaneously with the blocking by the service of a further opportunity to change the owner of the account (timeout for several hours), which made it possible for the attacker to use the account alone. Then came incoming verification SMS from instant messengers and social networks (<data taken>). Then there was confirmation from the managers of "<data taken>" that there were no alternative registrations in the Beeline network with the number, i.е. the SIM card was not compromised, the location of the subscriber FULL NAME34 did not change. After that, the employees of the company “<data taken>” began to receive requests from the intercepted account FULL NAME34 with a request to send archives of chats <data taken> to a fake address <data taken>, which was carried out by two employees. Further number FULL NAME34 was blocked by employees "<data taken>" and access to the personal account is closed. Thus, unidentified persons made illegal access to the personal account of the subscriber of PJSC "<data taken>" with number No. owned by LLC "<data taken>", which led to the inclusion of redirection of incoming voice calls from number No., after which this redirection resulted in to unauthorized access to the account in the application "<data taken>" of subscriber No. and call details of subscriber No., which resulted in the modification and copying of computer information. Explaining also at the hearing that at the present time the claims do not intend to declare.